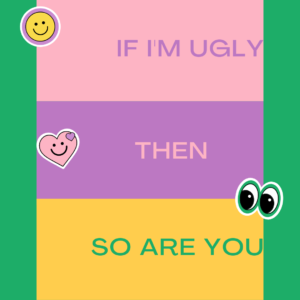 There are many different aspects to someone believing someone else is ugly, it can be an external feature or a generalized thought towards someone’s inner self, it’s a thought, it’s not a fact.

Many people perceive this amongst their own self, believing that they are ugly internally and / or externally, but again this is not a fact, it is generally a conditioned thought that has been portraited by others for one to then believe it for themselves.

Being ugly is not a thing, and anyone who thinks someone is ugly is then ugly themselves, would you not say?

We are all beautiful, in our own unique independent way, some of us laugh unconditionally, some of us are empaths, some of us will go to the ends of the earth to help someone else, someone will be the healer, someone will always be there for someone in their darkest hours, some of us help for no reason, some of us lift others up with words and courage, some of us share knowledge, some of us care deeply about others, and that is what should be classed as beautiful not a symmetrical face and a perfectly toned body, well unfortunately age defeats this in many ways, the soul doesn’t grow old.

Too many people believe they are ugly, but please take the aspiration that if anyone thinks you are ugly then that makes them ugly too, because no one should have the capacity to make someone else feel less than who they are, it is a thought not a fact.

Personally, and probably a shared view, its people who create mental health in another person, by lacking the above characteristics, and working more on the opposite, not being there, ignoring people, not caring, not listening, putting people down, trying to discourage someone’s dreams etc.

But ugly is not a thing that someone should feel, lacking the above characteristics makes you just who you are, and each person is entitled to their own characteristics, and you will grasp your people, but alienating someone is not okay and I do hope that anyone who has made someone feel less than they should holds some remorse with the ideal to not practice that again.

It is bullying, and for a person to bully it is generally a lack in their own life or learnt behaviour, this can be any age from the toddler stages to elder. Continuously going out your way with abuse, torment, arguing, to cause disbelief or to cause hurt is a form of bullying, and by doing this you can make a person feel ugly by making them feel not worthy of being kind too, if this has gone from a person to a group then a person can quickly feel more invalidated.

There is always a way of behaving, picking someone out for features or body shaming isn’t an acceptable distress, we have all been distressed we have all exchanged messages that we maybe we wish we never but there is a capacity within here to hold, not finding the personally percieved ‘ugly’ traits and making them visible, because that makes you ugly, doesn’t it?

I have never in my adult years looked at anyone as though they are ugly, I say adult years because as a kid there really isn’t much knowledge on what bullying is, well my generation weren’t alerted of the dangers of bullying, it happened but I never really got involved, I actually almost fought a huge group because they were bullying a kid, it is horrible but I am not going to ever say I didn’t bully a soul because I have joined in but, unknowingly, then as soon as the damage was seen, it was stopped – instantly. I have been bullied a few times, but it never lasted, maybe a day or so, I never reacted to it so they must have got bored.

I see it though; I hear of stories all the time. A friend of mine was really deflated not so long ago. They posted some motivating quotes and their other friend reacted with a laughing face as if to mock the post. The thing is with this scenario is they don’t have a clue what this person has been doing, how this person has been spending their time, the obstacles, the sleepless nights, the stress etc but they just wanted to try and knock them down, its funny really because most people who are like this have generally had everything handed to them, and if you stripped it all away and placed them in the same childhood grounds – it would be so much different. It is almost like looking down on a person because you had a head start.

No. We all come into the world the same way and we leave the same way, with nothing but what we are remembered by.

Bullies come in so many forms, they can be direct or in-direct. Direct is when you physically receive the negative, in-direct is when others receive the negative, so a person will spread rumours or negative words about you to make you look of a negative way, and unfortunately some people believe these, as though another person holds the key to another’s personality, but its reflective, it only shows you what that person is like doesn’t it? And most people who do this to you, will do this about you, keep an eye. But if this, is you, have a look in the mirror you still have time to change this.

If you have or are receiving this, you aren’t alone but please remember that this is not a reflection of you and you do not need to prove yourself, because as long as you know who you are to other people then that’s all that matters, and these people will be in your past soon. Move on and find your real people, the ones who don’t do this