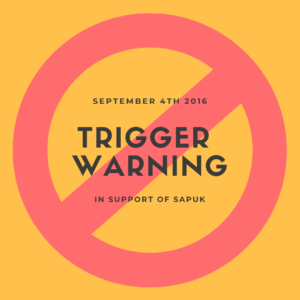 This is a story about my biggest trauma and has a journal insets from around the time of the event if you have any visual experience with losing someone to suicide, this will be a trigger for you. If it is a trigger, please don’t hesitate to contact myself or one of the team @ SAPUK;

It was the 4th anniversary of Bryan’s passing this year September 4th, 2020, and I managed to make it up Mount Malaga! Oh, it was amazing it was the best holiday I have been on, I will tell you about it in my travels post (coming soon), I tend to climb a mountain every year on this date, I think it must be a sense of feeling accomplished rather than feeling like I had failed, like it taunted me so much back in 2016… 💔

Back in 2016 life was somewhat stressful as it can be when there is so much going on around you at once, but what was to come was never expected …

Now I will roll it back….

It’s going to be okay.

“My body went into complete shock as i tried to come to terms with what had just happened.”

I think we take life for granted; we take our happy moments for granted for sure. It can be taken away so quickly – in a blink of an eye, who we thought we were, who we wanted to be, it can all go.

I do not remember much of what life was before Bryan took his own life, I presume the trauma must have clouded my memory… I remember being tired, trying to meet the needs of having a business… My mind in the short time prior is blank up until September 4th, 2016 18.11pm, i just remember being settled…

Bryan had struggled most of his life with mental health issues, but often refused the help when it was given to him, maybe it was an ego thing, none the less it shouldn’t of happened.

It was 18.11pm and I received a message from Bryan saying “Tell your mum I love her i’m sorry I can’t do this anymore”. I messaged him back with ” Bryan have a coffee, it is going to be fine, get some sleep – … “. But he never responded. I became on edge within minutes of receiving the message with a horrible gut feeling within me, I knew something wasn’t okay..

Bryan was such a caring a loving man, he devoted himself to my mother Nancy, whom of which devoted herself too (and still does), he was loved so much by us all, especially my son whom he shared an unbelievable bond with. He was known for his kind heart and would spread his warmth with anyone who needed it, being there for so many people, saving others too. Over time his mental health declined and with my mum being away for some time, he lost his way, and succumbed to depression. I didn’t see the signs that much, I knew he was stressed but I didn’t know he was this stressed, I didn’t know the signs like I do now, otherwise maybe things would have been different, which is why it is so important we are educated to understand the signs, without having to be told, before it becomes to late, as it did with Bryan.

Here is what happened…

When I received that message, I knew something was not right, I felt sick, uneasy and my gut feeling was telling me something. We had to go, and we had to go quickly was all I remember thinking.

I only lived around the corner, so it was a few minutes’ drive, we drove so quickly, we arrived at 18.17pm, 6 minutes later, I remember being frantic as the worst scenarios spun through my head, but what I saw was never what I pictured, it was much worse. We had a key to get in, but Bryan knew that, so he locked the inside door… (I am touching wounds whilst I write this, so I shed a tear for you Bryan).

We shouted through the inside letterbox numerous times as we didn’t want to disturb him in this manner if he was just sleeping, we had no answer, we started banging but still we heard nothing, we knew he was in we could see the keys through the glass pane, so we had no choice other than to break the glass to unlock the door. It was all going so fast.

Once we were in, it was eerily quiet, there was no presence… We ran through, I ran in to the backroom expecting to see him sat on his computer chair and my boyfriend at the time ran upstairs, but he was not in either so I carried on through to the kitchen and I saw him in the porch. I screamed.

(I am sorry Bryan)

And he was just perched there, with ladders beneath him and a wire around his neck, he was leant with too much pressure as to disallow him from breath. I stood in shock for a few moments trying to process and action what i had just seen, i couldn’t move, my bf at that time came running in and he got him down whilst i phoned an embulance, i couldn’t even speak and i know it was difficult for him to do that but he did it anyway, he then performed CPR whilst I was on the phone to the ambulance, we tried so hard to bring him back, I knew he was already gone, I could see the void in his eyes of no return, but none the less we carried on in hope that we could bring him back.

When the ambulance came, I remember two ambulances coming, I knew a paramedic, I just fell in her arms, she cried with me too, I will never forget the comfort of that hug, I really needed that. I watched them try and revive him too, again stood in complete shock as they quickly removed his top layers, they injected adrenaline, and then sent electric pulses through his body in order to revive him, there was no hope. I left the house once they confirmed he was gone. I had to make the call to his family, I still remember the screams as I heard her frantically running and out of breath as she struggled to accept what I was saying like it was some form of dream, I wish it were. We went home a couple of hours after the event, and people came round to support us, but I barely spoke, my body went into complete shock as I tried to come to terms with what had just happened. I led awake all night, with no thought process, we both just led there as the hours passed and daylight began.

Imprinted in my mind.

“He shed one tear and i will never forget that, sadness got a hold of him.”

In the upcoming weeks, I tried to keep life as normal as possible (this is the denial stage), I went to work the next day?! But given I had appointments and a shop to open I did not really have a choice, i didn’t want to let anyone down and wanted to keep busy. I had a son who was 3 and a family to withhold, I had been brought up to withstand battles, I had to keep it up. But every night I saw Bryan and every night it brought me pain, I replayed it over and over, he shed one tear and I will never forget that sadness that got a hold of him. I was wondering what I could have done differently, noticing the signs, seeing them so clearly now, but I did not have the knowledge on how to act upon them. I did not for a second ever believe he would take his life. I did not think he would leave us let alone Luca… but he did. I know that if I would have known what I know today I could have saved him, I would of. Forever will he be imprinted in my mind. SAPUK’s core.

The months after Bryan passed the pillars started to decrease slowly, I had to close my shop because I couldn’t focus enough to keep up with demand of clientele, my relationship quickly broke down because we became subconsciously caged with the huge amount of pressure to withstand the storms of what had become, I clung with desperation to these falling pillars, and what became of me was a fraction of who I was, I became so depressed that I put myself in hospital numerous times, my anxiety of death was constantly in my head, i broke down so often, i was very tired. My head was chaotic, I did not know what to do, I did not know how to vent this pain, I had nowhere to turn, i had to go back to the house where it happened, as i had to empty it and that was really tough too – I kept everything inside, but this is how I always have and will heal. I regenerate in darkness and silence, sleeping most of it away, but I did not get much of that with having a child, so recovery was slow. I think that when your mind is mentally challenged, and it does not get a rest it can send all sorts of negative signals throughout the body.

I started to read quotes, and sharing them to SAPUK, daily as I cleansed and tried to heal. SAPUK was formed on the foundations of my pain,136 nights it took me to stop replaying the events of 4th september, I did not sleep well within these periods and began to hallucinate as darkness started to take its toll. I could not focus on anything else; my mind did not understand so I had to subconsciously focus on it to be able to figure it out and then with time it would pass. I put all my time into building the foundations of myself again and thus created SAPUK. Over time and as the years have passed, I would say I have majority healed, but I will never forget as it is such a demanding memory – and reliving it will always break my heart.

Please do not put any pressure on healing. Time heals.